In my work world right around now, the regular academic year winds up and the rush toward convocation begins. And it’s also the start of conference season. The hard work of getting to conferences started long ago – early January is usually the deadline for submitting papers to summertime conferences. But now it’s time to agonize over your Powerpoints, jump on the plane, and stand up in front of your peers and talk about your research.

I went to my first academic conference in (gasp) 1990, as an MBA student, and only then because my thesis supervisor was organizing the conference and said I might enjoy it. And despite feeling like a very small fish in a very big and overwhelming pond, I really liked hearing about people’s research projects and listening to the audience’s comments. It’s no secret that sometimes audience members at academic conferences use discussion as an excuse to puff up their own research as better and more important than the presenter’s – but once you can spot that and tune it out, you can learn a lot from the constructive comments, and often get some great ideas for your own work.

This week the Academy of Management (AoM), the largest international conference in my discipline, published the program for its conference in August. I don’t regularly go to this conference because it’s expensive and it’s usually in hellishly hot places, but I always look through the program. After experiencing my annual depression about how little industrial relations research is presented by 5000+ delegates talking about almost everything else to do with employers, employees, and workplaces, I was surprised to see that this year AoM has gone all Twitter. Every presentation session has been assigned a hashtag, with a note encouraging attendees to “Tweet this session”.

It’s great that the AoM is recognizing the power of Twitter, and as a non-attendee I’m glad that if people do Tweet, I can follow some of the presentations I’m interested in. But, as indicated by some previous thoughts about Twitter usage not always being a great idea, I also have some very big concerns about this initiative.

In research jargon, my hypothesis is based on autoethnographic data collected from fieldwork with a sample size (n=1) – which, in normal people’s language, means I’m concerned because of my own experience of presenting last year at a conference at MIT. This was the third time I’ve been to this particular conference – I totally enjoyed it, and my paper was scheduled in a great session. However, after my presentation, I was looking up some conference information online, and was more than shocked to discover – completely by chance – that the audience members typing away on computers were not taking notes on what I was saying, or playing FarmVille because I was boring. Instead, they were Tweeting or posting to their blogs in real time about my presentation. 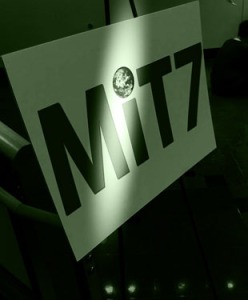 I’m still a little uncomfortable that none of them made sure this was OK with me before the session, especially the people who took photos – admittedly, a conference is a semi-public event, but there might be very good reasons why someone might not want their photo posted online with their name and current location attached. And I was relieved to see that the bloggers and Tweeters got the key points of the paper right. But in pre-Twitter days a lot of the Tweeted comments would have been expressed verbally in the room – reactions to the subject of the paper, comments on the methodology and the findings, and suggestions for related research that would add more dimensions to the underlying concepts – and would have stimulated some great discussion. Instead, the online comments were disconnected from each other, and pretty much lost in the huge torrent of information that rushes through Twitter. And notably, there were very few verbal comments in the room at the session.

Based on that experience, I’m curious to see if Tweeting rather than talking in conference sessions is going to become the norm, especially if Tweeting is encouraged as AoM is doing. At the moment, I would be worried if it does. Tweeting is quick, and it can reach a much larger audience beyond the people sitting in the conference room – but sharing ideas on Twitter, even in real time, isn’t even close to being as rewarding and stimulating as sharing those ideas verbally and having a lively free-ranging face to face discussion. Bouncing ideas back and forth with people interested in the same things I am is one of the things that I love about my work, and right now Twitter isn’t the way that’s going to happen.

Nevertheless, I’ll be watching the Twitter feeds in August from the AoM conference, and relying on reports from my friends at the conference, to see how AoM’s Great Twitter Experiment works.