This morning, 41,000 public school teachers in British Columbia went on strike, after nearly a year of negotiations and a partial lockout by the provincial government.

While this is undoubtedly a major event in BC labour relations, I’d like to draw your attention to two other current labour disputes going on in BC. Neither has received a significant amount of media attention, but both are worth keeping an eye on.

In Abbotsford, more than 400 workers at Cascade Aerospace went on strike June 4. The Cascade facility, located at Abbotsford International Airport, services the Department of National Defense’s Hercules heavy transport plane fleet, in addition to providing repair services for some commercial aviation companies.  The workers on strike are members of Unifor Local 114; talks between the union and the employer broke down over the company’s alleged requests for “operational flexibility”, which Unifor claims involve lower rates of pay for newer workers.

Cascade applied to the BC Supreme Court for an order to restrict picketing at the site, but the application was denied because, in the court’s view, Cascade did not prove its allegations that the picketing was causing economic losses to the company and that picketers were harassing passers-by. 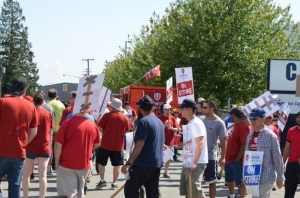 Striking workers on the picket line at Cascade Aerospace in Abbotsford, BC. (credit: cawlocal114.blogspot.ca)

Unifor alleges that Cascade is using replacement workers during the strike, which Cascade has denied.

I’ll admit to something of a personal interest in this strike, since Cascade is one of the larger employers in the community where I work. But, as detailed in this story, the outcome of the strike could have implications for workers in similar occupations in other parts of Canada.

And a few weeks ago, the locked-out employees at the IKEA store in Richmond marked the anniversary of one full year on the picket line. Approximately 300 members of the Teamsters union Local 213 are involved in the dispute, which is being monitored by labour organizations in IKEA’s home country of Sweden.

A recent complication in this dispute is that 35 workers have crossed the picket lines to return to work, and the union and IKEA are at odds over what should happen to those 35 workers’ employment at the store when the strike concludes.

The locked-out IKEA workers are clearly facing significant challenges, given that IKEA is owned by one of the richest men in the world, and in my opinion they should be commended for their persistence and their commitment to their cause. The BC Federation of Labour has asked consumers to boycott IKEA’s Richmond and Coquitlam stores until the dispute at the Richmond store has been resolved, and I encourage you to keep this in mind when deciding where to shop.