2018 is an Olympic year, and in my sport of figure skating, many countries are having their national championships right around now. These championships are stressful events in any year, but these ones will be even more stressful. The results of those championships go into choosing the skaters that will compete at the Olympics.

The skaters most likely to go to the Olympics tend to be the skaters that get the most media attention – but there are lots of other skaters competing at Nationals who also have wonderful stories. I’d like to introduce you to two of those skaters, because they represent what makes skating a truly great sport.

Elicia and Stephen Reynolds are competing in the senior ice dance event at the US national figure skating championships this week. They are brother and sister; Elicia is 27 and Stephen is 24. They’ve been skating together since 1997 – 20 years! – and have competed at the national level since 2007. This is their fourth time competing in the national senior ice dance event; they previously placed 14th, 11th, 13th, and 10th. Unusually for elite-level athletes, they also have careers outside of their sport; they are both professional violinists who perform and teach.

Ordinarily, as a Canadian, I wouldn’t know many of the US ice dance teams other than the ones I see at international competitions. But I learned about Elicia and Stephen a few years ago when a fellow skater sent me this story about them – a story which, I will admit, made me cry. And I have admired them ever since. 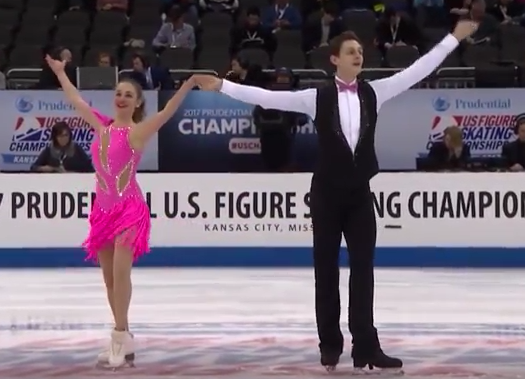 Elicia and Stephen Reynolds competing at the 2017 US Figure Skating Championships. (credit: YouTube)

It’s no secret that skating is an extremely expensive sport. At Elicia and Stephen’s level of competition, skaters (or their parents) can spend tens of thousands of dollars each year on costs such as coaching, choreography, ice time, equipment, off-ice training, outfits, and travel. As described in the story above, Elicia and Stephen started skating together as kids and became very promising skaters – and then the 2008 recession hit, and their father lost his job. Their family couldn’t afford to pay for them to keep skating, and they had to quit.

Five years later, when things were a little better, they started skating again. By then, they were too old to continue in the category they used to compete in. But to compete in higher-level categories, they had to pass several skating tests, and they couldn’t afford a coach. So…..they coached themselves. And they passed all the tests.

This is an astounding accomplishment. A coach is so important when a skater is preparing for a test or a competition. Your coach not only teaches you the skills you need, but also watches you skate and figures out what you need to fix – which you often don’t notice yourself – and tells you how to fix it. Learning those skills on your own, and becoming proficient enough in them to take a test, is next to impossible. And judges for higher-level tests have extremely sharp eyes and strict standards. Skaters aren’t going to pass a test at that level because the judges feel sorry for them or want to cut them some slack. The skaters have to earn it. So for skaters to coach themselves and to become good enough skaters to pass tests at that level is almost unheard of.

Now some people might look at Elicia and Stephen’s placements at US Nationals as seniors and say, why do they bother? Although the US has earned three entries in ice dance at the 2018 Olympics – which is the maximum number of entries that any one country can have  –  right now there are a lot of really good US senior ice dance teams. So it’s no insult to Elicia and Stephen’s talent and hard work to say that, realistically, they don’t have much chance of making the 2018 Olympic team, or of going to the 2018 world championships either. But what I love so much about them is that they keep skating, and putting their time and money into it, for the simple reason that they enjoy it so much. Here’s a demonstration of that joy: their long program from the 2017 US national championships.

Anyone who watches even some national- or international-level ice dance will be able to see that, yes, Elicia and Stephen are not as fast or as flexible as the top teams. But this is a beautifully choreographed program that really brings out the themes of the music, and it has some extremely creative moves. And look at how much fun Elicia and Stephen are having! You might not see smiles like that on the faces of better-known skaters.

Their delight in producing such a fine performance shows why skating is a great sport. Skating can be hugely frustrating, but it can also be hugely rewarding. And those rewards are not always medals, or points, or placements. The rewards come from working hard at something that is really difficult, from learning new things and challenging yourself, and from doing the best that you know you’re capable of. And you can always be proud when you skate well in a competition, regardless of whether you place first or last.

We’re going to hear a lot about the skaters that will go to the 2018 Olympics and world championships. But skaters like Elicia and Stephen Reynolds are just as important to the sport, because they remind us that skating is really about enjoying whatever you can do. I hope Elicia and Stephen continue to be part of the skating world for as long as they want to, because the sport needs more skaters like them.

If you’d like to see Elicia and Stephen competing at this year’s 2018 US National Championships, the short program in senior ice dance starts at 1:10 pm PST on Friday, January 5, and the long program starts at 12:30 pm PST on Sunday, January 6. I hope you’ll join me in cheering them on.