As the Canadian readers of this blog know, British Columbia’s elementary and secondary school teachers are currently engaged in a series of rotating strikes, because of the lack of progress in negotiations for a new collective agreement. The British Columbia government has responded by declaring a partial lockout, in which teachers will have restricted access to school property. The government also instituted a 10% pay cut for teachers, claiming that the teachers are not carrying out all of their job duties. (The government and the BC Teachers’ Federation (BCTF) spent an entire day in a hearing at the BC Labour Relations Board, arguing over the legality of the government’s actions; the LRB eventually dismissed the BCTF’s complaint, ruling that the government’s actions were within the parameters of the agreed-upon essential services guidelines.)

I’ve done a number of media interviews  about these events; I’m pleased to contribute to the understanding of this dispute and to help explain why things are unfolding the way they are. However, there’s an important piece of contextual information to this dispute that’s being overlooked. 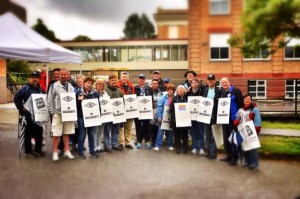 Teachers and support staff on the picket lines at a Vancouver-area school. (credit: @bersonphoto/Twitter)

The bargaining process that the BCTF and the government are using is being called dysfunctional – which it is. What’s being overlooked, though, is that it was on its way to getting better, and that direction was derailed by the current government. After the last round of bargaining between the two parties in 2012 ended with a mediated settlement, representatives of the government and of the BCTF agreed, on their own, on improvements to the process for this current round of bargaining. The improvements included jointly developing a data source to provide information for discussions, involving a facilitator in bargaining from the beginning, and starting the bargaining process earlier.

However, soon after the BC Liberals were re-elected as the provincial government in 2013, they rescinded the bargaining mandate for the government representatives that had achieved that progress – and replaced it with a new mandate, instructing new government representatives to seek a 10-year-long collective agreement with the BCTF. The effect of this change was, essentially, to cancel those mutually-agreed-upon improvements to the bargaining process, and to put the parties back into the same dysfunctional process that has historically been so problematic. I wrote about these events in previous blog posts, with links to the documentation of the agreements for improvement, here and here.

Dr. Charles Jago, the mediator that assisted in ending the 2012 dispute, has rarely spoken about what exactly led to the resolution of that dispute. This week, he gave an interview about his experiences to the CBC Vancouver radio show BC Almanac. The audio of that interview is here, and it’s well worth a listen – not only for his informative description of how the BCTF and the government finally came to an agreement, but also to get a sense of how very difficult it was for him to get the parties past their hostility toward each other. The fact that Jago was able to get the parties to cooperate makes the government’s subsequent abandonment of the mutually-agreed-upon bargaining improvements even more unfortunate and damaging. The hostility has clearly returned –  and, no doubt, it’s affecting the progress of bargaining this time as well.

This dispute is an interesting and complicated one. We’ll see how it continues to unfold.