This weekend, the 10th annual Canadian adult figure skating championships are taking place, in Kamloops, BC. It’s a historic occasion for adult skaters in Canada, and since (sadly) I can’t be there, I’m instead going to write about why this anniversary is so important.

As explained on this blog’s About page, I am an adult skater. I learned to skate as a kid, went public skating once in a while after that, and then took it up again in my late twenties. I have two completion badges from the same learn-to-skate program: one from when I was eight, and one from when I was 28. I never competed as a child. When I started competing as an adult, in 1996, I had to go to the United States, because there were no competitions for adults in Canada. There were hardly even any skating programs for adults in Canada, and very few coaches who would teach adult skaters.

However, if anything characterizes adult skaters, it’s persistence. The popular image of skating is little pixies in sparkly dresses doing triple jumps on their way to the Olympics – and the sport is structured to produce those little pixies. So big adults who might not ever jump at all, and who will only go to the Olympics as spectators, really have to struggle for their right to participate in the sport.

In Canada, we adult skaters were lucky that we had the accomplishments of adult skaters in the United States to point to as an example. By the time adult skaters in Canada started making noises about wanting more opportunities in the sport, the US Figure Skating Association already had an adult figure skating committee, a national adult skating championships, and a separate skill testing system for adults. (Rhea Schwartz, one of the US adult skaters who made all of this happen, talks about how they did it in this interview.) This was very helpful to us in Canada, in showing our national skating organization, Skate Canada, that adult skaters would participate – and would move heaven and earth to do so – if they were just given the chance.

I participated in the first regional adult skating competition in Canada, in Lethbridge, Alberta, in 2000. I think it says something about how much adult skaters in Canada wanted to compete that some skaters in that event came all the way from Ontario. But it wasn’t until 2004 that the first Canadian adult skating championships were held, in Burnaby, BC. At that time the event was called the “Adult Invitational”, although our joke was that you would be invited as long as the cheque for your entry fee didn’t bounce. Skaters came from as far away as Nova Scotia and New Brunswick, and it was a terrific experience. 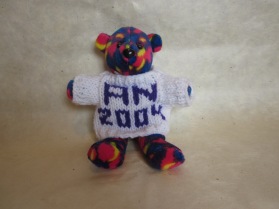 My “Wendy bear” from the first Canadian adult skating championships. US adult skater Wendy Bauer made one of these for each competitor. (credit: own photo)

Skate Canada held a feedback meeting at the end of the event, and I remember one of the officials looking at the jam-packed room and saying, with some trepidation, “I think the tiger has been unleashed.” At which, of course, we all cheered, howled and clapped.

The event has evolved considerably since then, with more competitive categories and more participants. The rules have also evolved; for example, if you’ve competed at the Canadian national skating championships – what we call the “other nationals” –  you now can’t compete in the adult championships that same year. (Yes, somebody actually did try to do this.) Synchronized skating has been added to the event, which not everyone is happy about because it takes a lot of ice time and other resources. The judging system, as it’s currently structured, assesses every skater using the same criteria – which, quite frankly, sucks for adults. If you can do something like a spin really well for an adult, but not so well in comparison to someone like Jeff Buttle, your spin and Jeff’s spin are going to be judged by the same standards, not by how well your spin compares to other adults’ spins.

And there are still debates about things like whether adult skaters should have to qualify at other competitions to be able to participate at the adult championships (which I’m definitely not in favour of). But, thinking back to that first event in 2004, I’m thrilled and delighted at how adult skating has persisted and grown, not just in Canada, but internationally as well.

There is now an annual international adult skating competition run by the International Skating Union – an event that has grown exponentially since it started in 2005. Two years ago, Midori Ito signed up to compete at this event. She was placed in a category against my friend Jan Calnan, who is a pretty great skater herself, but unlike Ito isn’t a former world champion and Olympic medalist. 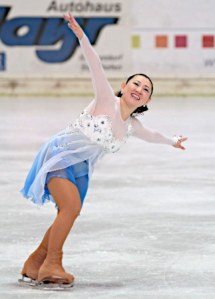 The reaction to this news among my adult skating friends went something like this: “HAHAHAHAHA! Poor Jan. Oh well, at least she’ll get to say that she competed against Midori Ito.” But then, at the competition, Midori’s program didn’t have as many elements to get points as Jan’s did – and Jan won. I think no one was more surprised than Jan, but Midori was very gracious, and said some wonderful things about the experience: “Having fun was the most important part and the result doesn’t matter. I saw a lot of people who were just enjoying skating and that gave me a lot of energy.” This is the kind of attitude that I love about adult skating.

(Hmm, Michelle Kwan is old enough to qualify as an adult skater now, and she has a regular job. I wonder what she’s doing in her spare time?)

Anyway, my fellow adult skater Allison Manley just wrote a post on her blog listing the best things about figure skating. So while I’m waiting for my inner ear problem to resolve itself so I can get back on the ice, I’m going to shamelessly steal from that post, because Allison explains way better than I could why adult skating is so great.

I can fly anywhere in the country, and wherever I land, I know that if I bring my skates there is another adult skater there to share ice with me at their local rink. There are some skaters I’ve known for over 10 years, and while I couldn’t tell you what they do for a living, we all know each other’s programs, successes, tragedies, and costumes. We have a great time cheering for each other at competitions, because we all appreciate what we each had to go through to make it there.

To me, adult skating in particular is like getting together with a large gathering of relatives at a semi-dysfunctional Christmas dinner: we all have our own special kind of crazy, and we all love and support each other regardless. We have eccentric aunts that arrive with their own liquor, nervous cousins who throw up in garbage cans right as their name gets called, the uncle who swears by his bizarre warm-up routine, the sister who takes a vodka shot as soon as they get off the ice, the childish prankster who throws panties, and the older-than-God grandpa who shamelessly flirts with everyone. We celebrate our annual gathering with joy, release, and more bling and sequins than you can imagine. And I love every second of it.

Good luck to everyone competing in Kamloops this weekend!!!