That decision ended a 14-year legal battle between the two parties over the BC government’s decision to pass legislation that removed the language around class size and composition from its collective agreement with the BCTF, and that also excluded those issues from collective bargaining. The BCTF claimed that the government’s actions violated Section 2(d) of the Canadian Charter of Rights and Freedoms, which guarantees freedom of association. Two previous Supreme Court of Canada decisions – in the Fraser case and the Health Services case – have established that in the context of labour relations, “freedom of association” includes workers’ rights to form unions and to engage in collective bargaining.

The Supreme Court decision on November 10 was remarkable because it came after a three-hour-long hearing with just 20 minutes of deliberation, which is a very short time to resolve a complex case with such a lengthy history.  The quick decision apparently came as a huge surprise to both the BCTF and the government.

I was hoping that the court’s written decision would explain more of the reasoning behind the justices’ quick decision.  But when the written decision was posted, it was simply a transcript of what was read aloud in the oral decision. However, the webcast of the entire hearing is now posted online – and that allows us to see the entire hearing for ourselves. The questions from the nine justices, and the discussion between the justices and the lawyers for the parties in the case, give some insight into what the justices might have taken into account in making their ruling.

I am not a lawyer, and I am certainly not a constitutional expert. So I’m not going to get into the court’s discussions around the legal implications of the Canadian Charter of Rights and Freedoms, because I’m not qualified to comment on those discussions. What I’ll focus on instead is the issues involving collective bargaining, particularly in the public sector, that were raised in the hearing.

I realize that readers of this blog may or may not be familiar with the history of this case. If you know what the case is about, you can probably skip the next section, titled “Context of the Case”, and go straight to the section titled “Discussion at the Hearing”.  If you’re not familiar with the case, read on.

Context of the Case

The BCTF and the BC government were involved in two previous cases that were heard by the Supreme Court of BC. The first case, in 2011, involved a law that was passed by the government in 2002; the BCTF claimed that this law was unconstitutional because it removed items from the existing collective agreement and also prohibited future collective bargaining on those items. The BC government’s position was that class size and composition in public schools had financial implications which the government was required to responsibly manage. (‘Size’ refers to the number of students in a class; ‘composition’ refers to the different needs of students in each class, as well as to the number of support staff in each school, such as librarians, counsellors and teachers’ aides.)  The BCTF’s position was that class size and composition affected teachers’ working conditions and thus should be negotiated.

Based on the precedent of the Health Services case, the Supreme Court of BC agreed with the BCTF and effectively suspended the legislation from coming into effect, while giving the government and the BCTF 12 months to work out a solution to their disagreement. The government did not appeal this decision.

The day after that 12-month period expired, the government passed a different law around the same issues. The BCTF claimed in its second case, filed in 2014, that this law should also be overturned because it was not substantially different from the previous law. The Supreme Court of BC again agreed with the BCTF. The court also found that the government had “bargained in bad faith” in the process leading up to the legislation, by, among other things, sending unprepared representatives to bargaining sessions, and deliberately provoking a strike by the BCTF.

The government appealed the decision in the second case to the BC Court of Appeal. That appeal was upheld, although one justice disagreed with the decision. The Supreme Court of Canada case was brought by the BCTF, who asked for the BC Court of Appeal decision to be overturned. The factums (written submissions) that all the parties made to the Supreme Court of Canada are available here.

Discussion in the Hearing

There were two issues raised in the discussion at the Supreme Court of Canada that I found particularly interesting. These were around that kind of evidence courts should examine to determine if good faith bargaining has taken place, and what bargaining for a collective agreement can consist of. 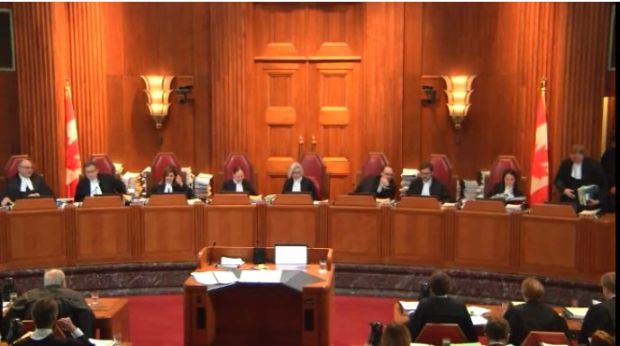 The justices of the Supreme Court of Canada at the start of the hearing. (credit: screengrab from archived webcast at http://scc-csc.ca/)

Essentially, good faith bargaining means that the parties bargaining for a collective agreement should be bargaining with the intent of reaching an agreement. For example, the parties should actually meet to bargain, as opposed to never or rarely being available for bargaining sessions, and not unnecessarily delay the bargaining process; they should exchange honest proposals and share accurate information. Bargaining in good faith doesn’t mean that one party has to agree to everything the other party wants just to reach an agreement, but it implies that both parties should be willing to adjust their bargaining proposals and to make counter-proposals as part of reaching a mutually acceptable outcome.

However, in Canadian labour legislation, the actual process and outcome of collective bargaining are usually not strongly regulated – beyond the requirement of good faith bargaining and the requirement that certain features be in the collective agreement (e.g. a minimum length of time for which the agreement will be in effect). Bargaining is theoretically a private process between the parties that the state should not interfere with. So courts and labour relations boards, while recognizing that collective bargaining is a difficult process during which the parties will likely disagree with each other, have to balance letting the parties reach the agreement that works for them with ensuring that the process operates fairly for both sides.

In the Supreme Court of Canada hearing, the lawyer representing the BC government put forward the argument (as I understood it) that the government’s bargaining with the BCTF was driven by the government’s general policy goals of “flexibility, choice, efficiency, and resource allocation”. The courts, in the government’s view, should not be ruling on the appropriateness of government policy – which, it seemed, could be the effect if courts closely examined the parties’ motivations during collective bargaining –  but should instead be looking primarily at whether there was a “genuine interest” by the parties in reaching consensus through bargaining.

Two of the justices questioned this perspective, on the basis that parties who do not intend to bargain in good faith will probably not state that explicitly. The justices seemed to be suggesting that, to determine whether bargaining was truly in good faith, courts must be able to examine both the substance of both parties’ proposals and the parties’ intentions – and whether there was “substantive reasonableness” in the parties’ proposals (as in, whether the content of the proposals could be expected to be taken seriously by the other party).

There was also discussion of what processes or actions could be considered to be part of “bargaining”. This issue arose because of the BC government’s actions in passing legislation that affected the content of its collective agreement with the BCTF. Here, we need to remember a fundamental difference between private and public sector employers; private sector employers can’t pass laws to get what they want in a collective agreement. So governments as employers have an exceptional power that they can use in reaching a collective agreement – but the issue that seemed to arise in this discussion was whether the BC government had adequately consulted or bargained with the BCTF before it took the step of passing the disputed legislation.

From the discussion, there seemed to be agreement that the content of a collective agreement didn’t have to be resolved only through the standard process of collective bargaining. There are other methods, such as consultations between the parties outside of formal bargaining, that could influence what ended up in the collective agreement.  However, what the justices seemed to be probing with their questions was whether there was sufficient communication and consultation between the BC government and the BCTF – “sufficient” in the context of bargaining in good faith – before the disputed legislation was passed. From the decision that the justices made, it seems that they felt that the BC government improperly used the legislative process to resolve disagreements that could and should have been resolved through the collective bargaining process.

The most immediate effect of the Supreme Court’s decision is that there will be new negotiations between the BC government and the BCTF. A clause in the current collective agreement between the two parties allows that agreement to be partially reopened after the end of the Supreme Court. So the two sides will now renegotiate the issues of class size and composition, starting from the contract language that was removed in 2002 by the government’s first piece of legislation. It appears that both the BC government and the BCTF expect to start that process soon.

The outcome of this case may also have implications for other governments in Canada, and for collective bargaining in general. Governments might now be expected to explore as many avenues as possible to resolve bargaining disputes with the unions representing their employees, and to have meaningful interactions demonstrating a willingness to compromise, before passing legislation that ends those disputes. This case also may place higher expectations on the quality of unions’ and employers’ interactions during collective bargaining. The outcome suggests that bargaining in good faith includes not only the parties’ conduct in bargaining, but also extends to the content of the proposals that each side makes in bargaining, and the parties’ motivations for making those proposals.

Finally, more than one commentator has noted that in pursuing this case for so long, the BC government has not only incurred substantial legal expenses, but now may have to spend more than $200 million on additional costs, such as hiring more teachers in the BC public education system. The next BC provincial election is scheduled for May of 2017. It wouldn’t be surprising if these additional costs, and the government decisions that caused them, become an issue at election time.