The BC Labour Relations Board case about whether teachers withdrawing their volunteer work constitutes strike action got me thinking about organizational citizenship – a concept that doesn’t get much attention outside academic research, but which explains a lot about the impact of behaviour on workplaces.

Put simply, organizational citizenship (OC) behaviour is the things we do at work not because we have to, but because we want to make our workplace a better place to be. For example, if a new employee is trying to figure out how to load paper in the photocopier, and photocopier maintenance isn’t part of my job, I can walk away and let the person in charge of the photocopier deal with the situation. Or I can show organizational citizenship behaviour and help the newbie out, and tell him or her to give me a call if there’s anything else they want to know.

One of the things that’s fascinating about OC is that’s it’s often most noticeable when it’s not there. It’s annoying and demoralizing to be in a workplace where, day after day, people expect others to pick up after them or don’t treat their coworkers politely or don’t help them out. But another fascinating thing about OC is that it’s voluntary. An employer can direct employees in what tasks they’re expected to perform, and what level of performance is expected from them – but there’s only so much an employer can do to direct employees to help each other out and to contribute positively to the workplace. People engage in OC when they like their workplace and actively want to keep it that way. 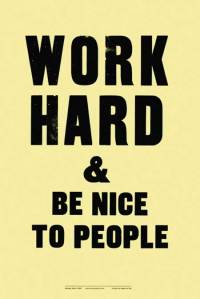 What a great idea! (credit: http://www.anthonyburrill.com)

This research study reviewed and re-analyzed 168 studies of organizational citizenship published from the 1980s onwards, and found some very interesting results when the data from all those studies were combined. Increases in the amount of OC behaviour improves individual workers’ performance, while decreasing their absenteeism and how much they want to leave the organization. At the level of the unit or the organization, increased OC behaviour leads to increased productivity, efficiency, profitability, and customer satisfaction

BC teachers who volunteer their time to facilitate activities like students’ sports, performing arts, and academic assistance are clearly displaying OC. They see these activities as being important to their students’ progress and development, and it makes their jobs much easier if they’re working with committed, interested and engaged students. And, in many cases, it seems that if teachers don’t do these things, no one else will (it would be nice if more of the people complaining about these lost activities would become volunteers themselves and do some of them).

And, in light of the historically bad relationship between the BCTF and the BC provincial government, another finding from the research article is particularly relevant: that “somewhat stronger relationships were observed between OCBs and unit-level performance measures in longitudinal studies than in cross-sectional studies.” In other words, the longer that OC behaviour is present over time, the more strongly it (positively) influences the organization’s perfomance. So OC isn’t important just for the immediate goodwill it creates when it happens; it builds on itself and has an increasingly stronger effect on the organization’s long-term outcomes.

In an atmosphere of labour strife, punitive legislation, job uncertainty, and cutbacks, it isn’t clear whether OC behaviour is increasing or decreasing in workplaces in general. But it’s still worth thinking about, because it reminds us that work isn’t just doing our assigned tasks. Those tasks are embedded in workplace culture and the human interactions that go on within that context. The teachers have withdrawn their volunteer labour as a protest against their employers’ and the provincial government’s actions, but if the withdrawal is  a withdrawal of volunteer work and a withdrawal of OC behaviour, there might be workplace effects a long time after the immediate impact subsides.