Nick Davies’ book Hack Attack  is a powerful read. It’s the story of Davies’ investigation into the phone hacking conducted by several of the British newspapers owned by Rupert Murdoch’s News International. The investigation led to a judicial inquiry, several criminal convictions,  and the closure of the News of the World newspaper. And since Hack Attack was released last year, eight victims of phone hacking have filed a civil suit against the Mirror group of newspapers for invasion of privacy – a suit that is currently being heard in a London court.

Davies’ book describes the details and scope of the hacking – and how the hacking gradually became exposed, thanks to several anonymous informants – but also illuminates the interconnections between the British press and the British government. Britain’s newspapers have a power over the government that really doesn’t have any parallel in North America. And some of those newspapers used that power negatively – not just embarrassing and punishing people as a way to boost circulation, but, more sinisterly, pushing Murdoch’s conservative and neoliberal view of how the world should be. As Davies says, “The story may start with crime in a newsroom, but it goes way beyond that. It goes to the heart of what it means to be a democratic society.”

The story of Hack Attack concludes with some vindication. The phone hacking activity was exposed and halted, and some of the bad guys were punished. So you might expect Davies to end the story on a positive note. But he doesn’t. He says, “For a while, we snatched a handful of power away from one man. We did nothing to change the power of the elite.” 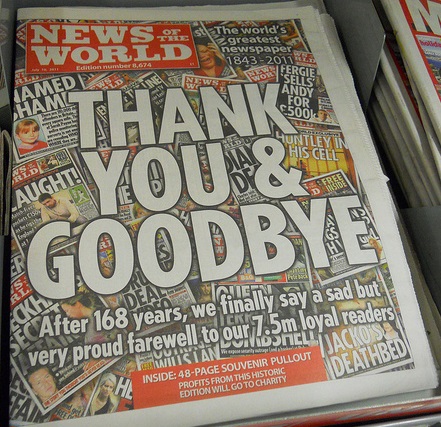 The last edition of the News of the World, July 10, 2011. The newspaper was shut down after 168 years of publication, when its involvement in phone hacking was revealed. (credit: Mikey/Flickr)

Here is part of Davies’ very insightful explanation of the structural factors that entrench power among certain groups in society.

When you allow global corporations to roam global markets, you make them more powerful than nation states; when you ‘roll back the state’, you reduce the power of the people in each nation; when you ‘cut back regulation’, you allow the biggest corporations to dominate and exploit their territories; when you break trade unions and tear up employment laws, you allow those corporations to ride roughshod over those who work for them. The simple, beautiful idea that people should run their own societies disintegrates, allowing the few to rule and the many to follow.

…And all of this is cloaked in the twisted language of the power elite in which the ways of the wealthy have always been disguised as a service for the needs of the poor. The predecessors of those who promoted this neoliberal backlash sat on the boards of Victorian coal mines, explaining gently that they must preserve the right of children to work down the pit and that they must resist the do-gooders who would take away the free choice of the children and deprive their families of their income. They were the shipmasters who argued that it was nothing less than their duty to provide good cheap strong labour from Africa for the king’s dominion in the West Indies and beyond, whose growth was essential to England’s own well-being, and that good people must understand that the conditions endured by a savage on the verge of starvation in darkest Africa were far inferior to those of a bonded labourer in the care of an employer who had every reason to ensure that he was well kept.

War is peace, freedom is slavery, ignorance is strength.

So it was that a whole generation of English men and women were told that they should lose the welfare state and the trade unions and the protective laws for which their ancestors had fought and that the balance of power should be tipped backwards by a century and more, because this would make them free; and in case they hesitated for a moment and questioned the idea that the wealthy elite would know and care more about their welfare than their own parents and grandparents, they were also offered a little cash. ‘Vote to return to laissez-faire capitalism, and we will cut your taxes. You may lose your society but you will gain a bigger TV.’ A very great theft was organised on the simple basis that its victims had nothing to lose but a decent life.

While Davies is specifically describing these changes in the context of English society, some or all of what he describes can, unfortunately, be seen in most industrialized countries. There might be temporary victories against the dominance of the 1%, but meaningful and long-lasting societal equality will require fundamental changes in how things work. I would like to think that important work like Davies’ could be the catalyst for some of those changes.