Last month I spent two weeks in Britain, and purely by chance those two weeks were during the campaign leading up to the UK general election on May 7th. Elections are an incredibly important part of democracy, and I never forget how fortunate I am to live in a country where I get to vote and where my vote can make a difference. Since I became old enough to vote, I have only missed participating in one election that I was eligible to vote in (I had a good excuse – I was in Antarctica). But my trip to the UK gave me the opportunity to see how election campaigns work in another country with a parliamentary system of government – and that being the country whose legislative structure most strongly influenced my own country’s legislative system. END_OF_DOCUMENT_TOKEN_TO_BE_REPLACED

I’ve written a couple of blog posts about media outlets mindlessly reporting information without bothering to verify it first. Here, sadly, is another example. The Daily Telegraph newspaper in England ran a letter it claimed was signed by “5000 small business owners” expressing support for Prime Minister David Cameron and the Conservative Party in the upcoming UK general election. Blogger Alex Andreou decided to follow up some of the names of the signatories to the letter, and discovered….that it was not quite what was claimed. And now other bloggers and writers are finding other discrepancies and errors. Good on Alex, and shame on the Telegraph for its carelessness.

UPDATE 21:00 The list is back up. Scanning it for changes. It was down for a good twenty minutes, then briefly up then disappeared again and now it is back up. No possibility of mistaken http, as it was open on my desktop when it suddenly refreshed to this. What is going on? 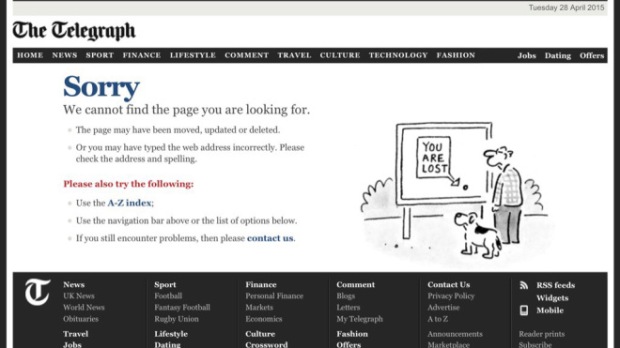 UPDATE 20:30 on 28/4: The Telegraph has finally taken down the list of businesses which purported to have signed the letter. The link is now dead. The letter is still on their website, but the link to the signatories leads nowhere. No statement or apology has been issued as far as I am aware – from The Telegraph, CCHQ or Karen Brady.

The Charity Commission has become involved now, writing to charities it has identified from the list. A spokesperson…