This year is the 50th anniversary of the publication of The Feminine Mystique, the revolutionary book by Betty Friedan that made many women in the 1960s realize they weren’t the only ones dissatisfied with their lives and with what society expected of them. (In this excellent interview,  sociologist Stephanie Coontz talks about her book A Strange Stirring which explores how influential The Feminine Mystique was.)

This week I read I Shouldn’t Be Telling You This, a career book for women written by Kate White, the former editor of Cosmopolitan magazine. The book’s subtitle is “success secrets every gutsy girl should know“. From the gushy cover copy, I fully expected the book’s contents to be superficial and air-headed: Sex and the City-style career advice. I can’t stand Sex in the City, and I can’t stand chick-lit books either – the last chick-lit book that I started reading, I ended up throwing across the room because the Bridezilla main character was so completely annoying and self-centered. To be honest, I was expecting something equally bad from this book, but I thought I should read it to see what kind of career advice was being handed out in the popular press. 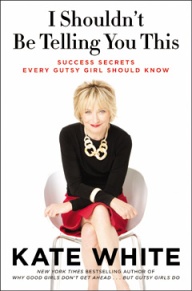 The cover of I Shouldn’t Be Telling You This. (credit: katewhite.com)

I’ll admit I was very pleasantly surprised by the book. It’s written in a chatty informal style that’s easy to read, and it contains some excellent and very sensible advice about important career issues – such as negotiating salaries, managing difficult personalities in the workplace, and knowing when to stick with a job and when to get out (and how to get out without too much damage). I particularly liked its very blunt statements about things not to do, like being late for a job interview, or publicly dissing any of your former employers.

However, after finishing the book, and thinking about the title, I wondered: Why shouldn’t you be telling us this?

I get that the book’s title could attract readers who might be turned off by a more conventional career book. But, ironically, a lot of the discussion in the book is about how women undervalue themselves and don’t take their own needs and wants seriously. Why does really good information to counteract that have to be in a tee-hee just-between-us-girls format? The back cover of the book says: “You’ll come away with the know-how you need – and you’ll feel as though you’ve just gotten up from a fabulously dishy lunch“. Really? Does career advice for women have to be “fabulously dishy” to get attention, or to get its point across?

And in case anyone thinks I’m picking on Ms. White specifically, go to Amazon and search the books section for “career books for men” and “career books for women”. One of these searches is going to result in a lot of swirly typefaces with photos of glossy lipsticks, stiletto heels, and purses. The other search is going to produce a lot of sober-looking neutral colours with the words “rich”, “achievement”, and “practical”. I’ll let you guess which is which.

The Feminine Mystique was a big step forward in helping women realize what they were capable of in life. Maybe we’ve made some progress since then. But, maybe, things really haven’t changed that much – if books like I Shouldn’t Be Telling You This, with realistic and useful career advice for women, have to be presented as girly gossip sessions in order to sell.