One of the principles that managers are taught is the importance of listening to employees. Listening to employees makes them feel valued and included. But the other side of that principle, which regularly gets overlooked, is that the listening should result in action. If employees express concerns about the organization to managers, and nothing happens, that can lead to a distrust that potentially undermines the employee-manager relationship in the long run.

The Canadian Broadcasting Corporation (CBC) is Canada’s publicly funded national English-language broadcaster; its French-language counterpart is Radio-Canada. In the last couple of years, CBC has had several internal management-employee disputes that have spilled into public view. After radio host Jian Ghomeshi was fired in 2014, it emerged that several employees had filed formal and informal complaints with CBC management about his harassment and abuse, but no meaningful action was ever taken. Last year, there was criticism of the CBC’s coverage of anti-racism protests in the US, reports that journalist/host Wendy Mesley had twice used the N-word in workplace meetings, and an arbitration decision that found CBC had wrongly dismissed a reporter who criticized comments by (former) hockey commentator Don Cherry. Not surprisingly, CBC employees then publicly expressed concerns about the lack of diversity within CBC’s own workforce, as well as bias in the choices of what was considered “news” and how some issues were presented.

In response to those complaints, CBC editor-in-chief Brodie Fenlon publicly committed to a number of workplace initiatives, including END_OF_DOCUMENT_TOKEN_TO_BE_REPLACED

As of May 31, I’ll be retiring from my position as Professor in the School of Business at the University of the Fraser Valley. I’m moving to a part-time position at the BC Council on Admissions & Transfer, which administers BC’s post-secondary transfer system.

But this blog will continue. This is a very interesting time for work and for organizations, with the changes that the COVID-19 pandemic has brought about. A lot of fundamental assumptions about how and why we work are being questioned, and there is lots to think and write about.

I’ve been posting irregularly of late, but I hope to post more regularly once things have settled down. Thanks to All About Work‘s readers, followers, and commenters for your continued support.

One of the ways that business schools and universities like to promote their contributions to society is to emphasize their external connections. These connections take many forms. There are formal relationships such as co-op placements for students, program advisory councils, and participation in external community and academic organizations. Less visibly, there are also connections such as researchers collecting data from or conducting research for organizations, and businesses providing opportunities for students to do class projects or case studies.

However, to paraphrase George Orwell, it appears that at some universities all external connections are equal, but some are more equal than others.

END_OF_DOCUMENT_TOKEN_TO_BE_REPLACED

The Globe and Mail newspaper is currently running a series of articles titled Power Gap: a data-based investigation into gender inequality in Canadian workplaces. I’m really pleased to see attention and resources being directed towards understanding this issue. To date, the articles are doing a very good job of unpicking why there are more men than women in positions of power in Canadian workplaces, and why men are generally better-paid. But the series also shows how difficult it is to address these imbalances in a substantive way, because of data limitations. It’s hard to solve a problem without fully understanding what’s causing the problem.

The complete explanation of the Power Gap project methodology is paywalled, but to summarize it, the analysis relies on data from “sunshine lists” – lists of public sector employees with an annual salary above a certain level, which most Canadian provincial governments release every year. Because these lists are not consistently formatted across provinces – for example, not all provinces release employees’ full names – the data on the lists had to be combined and then adjusted so the data were comparable.

Also, since the purpose of the Power Gap project was to investigate gender inequality, the employees’ gender had to be added to the data set. Gender data were collected through several different methods, including END_OF_DOCUMENT_TOKEN_TO_BE_REPLACED

After ten months of pandemic-related lockdowns, rescheduling, and cancellations, it’s almost becoming clichéd to say that “work as we know it may have changed forever”. But it’s true. The key word, though, is “may”. We don’t know if the way many of us are working now is going to be the way we’ll always work. We don’t know if employers and organizations are permanently changing the way that they’re going to organize or run their operations.

But one thing we do know is that the pandemic has had an unequal effect on workers’ productivity. Both women and men are working at home more, but END_OF_DOCUMENT_TOKEN_TO_BE_REPLACED

“Systemic racism” is a term that’s been heard a lot in recent weeks, as communities, regions, and societies confront long-standing ugly realities around race and inequality. But what’s lacking in many of the reports about these upheavals is an explanation of what “systemic racism” means.

It’s also important to remember that organizations don’t make decisions or choices; people do. An organization doesn’t decide by itself to be racist or sexist or ableist. It’s decisions by people within the organization that cause those situations.

I’m not a writer, I blog mostly for myself, so no editorializing here please. Don’t call me a hero. I’m not one. Heroes are those crazy folks who rush into burning buildings, not concerned for their own safety. Trust me, I’m concerned. I’m SCARED for my safety. I’m not a hero. I’m just a nurse. […]

via Don’t call me a hero — kmacchiaverna

Dame Athene Donald, a physicist at the University of Cambridge, has some very wise words for those of us suddenly adjusting to working full-time at home. “Do what you can, and remember that there are no wrong feelings. [And] be kind to yourself.” 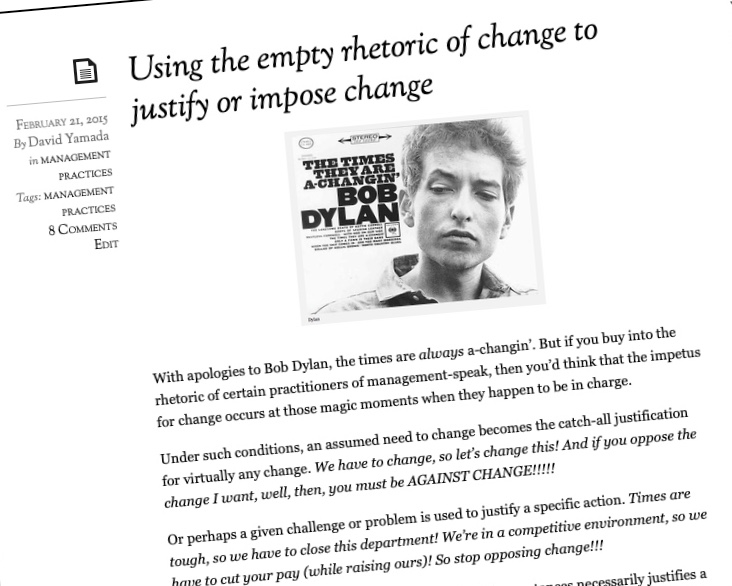 Hello dear readers, over the life of this blog, I’ve sometimes taken aim at certain popular management practices. Here’s a roundup of some of my favorites: Using the empty rhetoric of change to justify or impose change (2015) (link here) — “With apologies to Bob Dylan, the times are always a-changin’. But if you buy into […]

via Roundup: On organizational change rhetoric, strategic planning, and consultants — Minding the Workplace

There’s more than enough chaos going on in the world right now. But amidst the coronavirus crisis, a couple of trends in the world of work are becoming more important.

We have been told for years that END_OF_DOCUMENT_TOKEN_TO_BE_REPLACED