I recently returned from presenting a paper at the 8th Annual Colloquium of Current Scholarship on Employment and Labor Law, a conference that was started by a group of American law professors, and hosted this year by the William S. Boyd School of Law at the University of Nevada-Las Vegas. Although I am not a lawyer or a law professor, and although there are some pretty significant differences between American and Canadian labor and employment law, this particular conference is always extremely rewarding. The program is very inclusive – people present research at all stages of development, from potential ideas to already published books and articles – so I always learn a lot and meet really interesting people.

There was some excellent research presented at the conference itself, but what I want to talk about in this post is an event that for me, as a Canadian, was extremely enlightening and inspiring. Most of what we hear in Canada about American industrial relations is very depressing news, such as the steady decline of union membership and the recent legislation in several states attacking the collective agreements and bargaining rights of public service workers. But on the Friday night of the conference, we all got on a bus and went on a field trip to visit the Culinary Workers Union Local 226 at their union hall. And there we heard a very different story about how American industrial relations can work. 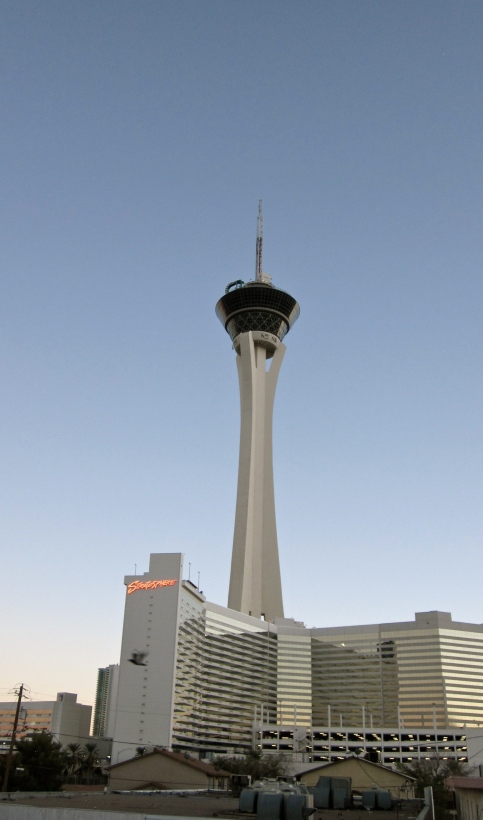 The view from outside the Culinary Workers Union Local 226 union hall: the Stratosphere tower at the north end of the Las Vegas Strip. (credit: own photo)

I think most Canadians would be surprised to learn, as I was, that Nevada is now one of the most highly unionized states in the US, and also has an exceptionally strong rate of unionization in the private sector. Organizing workers in the private sector, and especially in service industries, is often extremely difficult, because of the relatively low skill levels in many of the jobs, the relatively high turnover of workers, and tight profit margins making it difficult to achieve better worker wages and benefits. But Local 226 has been in existence since 1935, and currently has more than 50,000 members working as kitchen staff, servers, porters, and housekeepers in most of the major Las Vegas hotels (here is a list of locations where the local’s members work). So Local 226’s history demonstrates that a lot of the beliefs about the challenges of unionizing service industries are not necessarily true.

At the union hall, we were treated to a buffet dinner made and served by students of the Culinary Academy of Las Vegas. The academy is a joint venture between Local 226, the bartenders’ union, and 26 Las Vegas hotels, and it has graduated over 35,000 students qualified to work in the Las Vegas hospitality industry. This challenges the idea that unions and employers always have different and opposing interests. Through this school, the unions create opportunities for potential union members, the employers get well-educated employees, and the students get job skills, so everybody wins. It’s a wonderful example of union-employer cooperation – and the dinner was one of the best meals I have ever had in Las Vegas.

After dinner, a series of speakers told us about their experiences with Local 226. Professor Michael Green of the College of Southern Nevada  – whose father was a casino dealer during the time when union organizing started in the casinos – gave a very entertaining talk about the development of Las Vegas and the role that unions played in building its hospitality industry. Geocanda Arguello-Kline, the secretary-treasurer of Local 226, told us about coming to Las Vegas as an immigrant from Nicaragua and joining the union as a hotel housekeeper, which eventually led to her becoming an active participant in the union and her current position as an officer on the local’s executive.

Debra Jeffries, a cocktail server, was involved in the 1984 Las Vegas hospitality industry strike, which I was astounded to learn lasted for a whole nine months (and there was another strike in 1991, which ended up being one of the longest strikes in US labor history). Debra told us about taking her two-year-old son to a picket line on the Las Vegas Strip, and then hiding with him in a casino restroom for two hours while riot police clashed with picketers on the street. More recently, she has been part of an initiative where union representatives visit local churches to develop connections to the larger Las Vegas community. I was also really surprised to learn that Las Vegas, despite its party-town reputation, has a very large number of places of worship.

Multilingual banner on the wall at the Local 226 union hall. (credit: own photo)

Leain Vashon, a porter and a member of the local’s executive, told us about the union’s struggles to eradicate the workplace racism he and others encountered when he first started working in Las Vegas, and how the wages from his unionized job helped him buy a home and put his two children through college. And Casiano Corpus told us about participating in a hunger strike last year to protest the lack of progress in the union’s negotiations with Station Casinos.

As I was listening to these very powerful stories, a couple of things struck me. One was how much difference unionization can make not just to the union members, but also to the community’s economy. These union members have bought houses, paid school tuition, paid taxes, and so on. The economy wouldn’t be benefiting from those investments if these workers were paid the wage rates that are usually associated with service jobs. Also, being part of a union has given these workers stability. They don’t have to worry as much about being dismissed for irrelevant reasons, such as being “too old” or not fitting the company’s “image”, and they all have lived in and contributed to their community for considerably longer than is likely the norm for most service workers. And although Las Vegas has suffered along with the rest of the US with the recent economic downturns, I can’t see there being too strong an argument that having a unionized workforce is seriously hurting the city’s hospitality industry, or causing potential investors or job creators to go elsewhere. There are new hotels and casinos being constructed all along the Strip, and it’s so busy there on a weekend that you can hardly walk along the sidewalk.

We also heard that there are some upcoming challenges for the Las Vegas hospitality unions. In addition to the Station Casinos dispute, there is an ongoing struggle with the owners of the Cosmopolitan hotel, who have been reluctant to settle a first collective agreement. Additionally, several major collective agreements have expired in the last few months and there has not been much progress in negotiations.  However, Local 226’s history shows that there’s a lot that can be accomplished through determination and collective action, so it will certainly be interesting to see how these events play out.

(Thanks to Local 226 for being such gracious hosts, and to professors Ruben Garcia and Ann McGinley at the Boyd School of Law for organizing the event.)