Last week, the New York Times published an article by Adam Grant that set off more than a few firestorms of debate. The article, titled Why Men Need Women, proposed that women have a “warming effect” on men, causing them to be more generous and compassionate. It cited a number of research studies suggesting that men behaved more selflessly when they had female relatives or co-workers, and concluded,

The article received more than 300 responses on the New York Times website, and was the subject of a lot of harsh criticism on Twitter. From my reading, there seemed to be several major themes in the criticisms of the article:

(And, although Grant was likely not responsible for the title of the article and the illustrations that accompanied it, a number of commenters took exception to those as well – particularly the illustrations, which because of their storybook/fairytale style were characterized as infantilizing and demeaning.)

Grant responded to the criticisms a few days later in the Huffington Post, in an article entitled Do Women Really Civilize Men? Given the heated accusations of sexism that were leveled against Grant’s first article, I’m not sure the HuffPo made a great editorial decision by putting this article in the “Women” section with a lavender-colour page heading. But nevertheless, here’s a summary of Grant’s rebuttals: 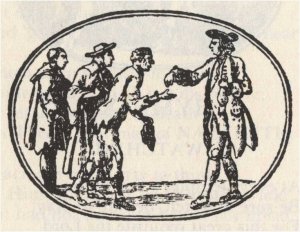 Woud this man give more if he was influenced by a woman? (credit: Wikimedia Commons)

I’m fascinated by the debate around this article. I think that Grant was well-intentioned in writing the original article, and I understand the constraints he faced in writing a relatively short article on a complex phenomenon for a non-specialist audience. However, despite Grant’s additional explanations, there are aspects of the original article that still concern me.

One is that the basic argument in the article – that women influence men to act more generously – is only supported by seven cited studies. The influence of gender on behaviour is a hugely researched topic in many academic disciplines, and although this article is about a specific type of gender-related influence, seven studies doesn’t seem like a lot to support such broad assertions as “the beneficial effects that women have on the men around them”.

Another is that some information about the cited studies is overlooked – information that could call into question how strongly those studies support the existence of a “warming effect”. For example:

None of these are fatal problems, and none of them are Malcolm Gladwell-style excessive extrapolations – but it does lead one to question the validity of the points that Grant is making, if selective and/or conditional evidence is all that supports those points.

And, on a larger level, the article as a whole doesn’t seem to have clear fundamental concepts or purpose. The opening sentence of the article is: “What makes some men miserly and others generous?”. The second paragraph answers that with “The mere presence of female family members – even infants – can be enough to nudge men in the generous direction.” These sentences seem to establish the article as a discussion of research demonstrating how men’s financial generosity is influenced by having women in their families.  However, in the course of the discussion, the “family”  and the “financial” factors gradually disappear, into a more general exploration of how men’s behaviour may be more sharing-oriented if women are around. Now obviously family influences could affect how men share, and financial choices are a type of sharing behaviour. But to generalize from those very specific scenarios into the very broad assertion that women have  “beneficial effects” on men – and then to characterize those influences as “profound” – is risky, at best.

In his HuffPo article, Grant states: “My aim was…to stimulate dialogue about how and why women make men better”. I appreciate his “passionate advocacy” for women – although I would hope that he also advocates for working women who are not in managerial, executive or leadership positions –  and the issue of gender influences on workplace behaviour is well worth any attention it gets, so I am glad that he brought it up. But I’m not sure that debatable reasoning and weakly supported generalizations are the best way to stimulate positive action.