Public sector compensation disclosure lists – “sunshine lists” – are lists of individuals in public sector jobs that are paid more than a certain amount. These annual lists usually include the person’s name, the public sector organization they work for, their job title, and their annual earnings for that fiscal year.  In Canada, five provinces have some version of a legislated “sunshine list”: Alberta, Nova Scotia, Ontario, Saskatchewan, and New Brunswick. (Other provinces publish salary information in their public accounts, but don’t produce a single comprehensive list.)

The reasons for publishing these lists usually involve “accountability” and “transparency” – but recently there has been pushback from some of the workers included on the lists.

In Nova Scotia, members of the union representing the province’s nurses argued that nurses earning over $100,000 per year (the minimum salary for inclusion on Nova Scotia’s list) should not be included on the sunshine list. According to the union, any nurse making that amount of money in a year is doing so only from working overtime shifts. They alleged that nurses on the list were being “shamed”, and that the list should only include individuals whose base salaries – not total pay –  exceeds $100,000.

Newfoundland does not yet have a formal sunshine list, but the provincial government has pledged to create one. In the meantime, several news organizations have filed freedom-of-information requests to create their own, and the Newfoundland teachers’ union objected to the release of information about school principals. The union claims that releasing the full set of information (name, job title, location, and salary) for workers earning over $100,000 is an “invasion of privacy” for those individuals.

These disputes highlight some of the conflicting tensions around sunshine lists. The public certainly has a right to know how its tax dollars are being spent – and if it wasn’t for sunshine lists, we would never know about allegedly excessive spending on executive salaries for events receiving government funding, such as the 2015 Pan Am Games in Toronto. We also wouldn’t know how much someone gets paid in a high-profile job like a university president, compared to other workers in the same organization. Sunshine lists provide very valuable information in these types of scenarios. 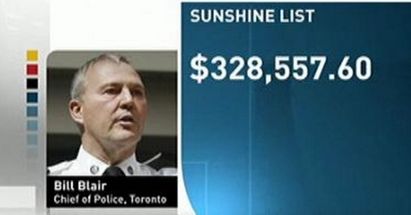 The annual compensation for the City of Toronto’s police chief in 2012. This is the type of information that might not be publicly disclosed if there wasn’t a sunshine list in the province of Ontario. (credit: cbc.ca)

On the other hand, there really aren’t many parallels to the sunshine list in the private sector – other than, perhaps, the disclosures around executive compensation that are required for some kinds of publicly-traded companies, or salary lists in professional sports. So one could ask why public sector workers should be subject to this sort of scrutiny simply because of who they work for. It opens them up to ill-founded criticism like the Fraser Institute’s perennial complaints that public sector workers are overpaid.

And there are valid points being made by both the Nova Scotia nurses and the Newfoundland teachers. If nurses are making more than people think a nurse should make, because of working overtime, the problem is not only what the nurse is being paid. It’s also that the nurse’s employer (usually a hospital or a regional health authority) is apparently so short-staffed that it needs overtime shifts to keep functioning. That’s a systemic human resource management issue – but the “sunshine list” focuses the problem on the individual worker, not on the employer’s HR practices. Likewise, if a school principal is living in an area with high unemployment or in a small community, having everyone in the area know that he or she is a high earner could create problems for that person – even if their pay is fair in terms of their job responsibilities, or in comparison to others in the same position in other regions.

And sunshine lists might also have other, unintended side effects. For example, if public sector salary rates are publicized, that could have the effect of driving up salaries rather than controlling them, as employees see what comparable employees are earning, and demand the same. If the sunshine list results in wages declining, or if employees discover discrepancies that they think are unfair and that they can’t change, that could then incur most costs in the form of turnover, as employees leave in search of more equitable compensation.

The basic principles of sunshine lists are sound. But it appears that the procedures around them could use some refinement – like indexing the cutoff point for the list so that it’s a reasonable dividing line in each fiscal year, and contextualizing the information to show how the salary compares to others’ or how it was arrived at.

These changes won’t remove all of the problems around public sector salaries – for example, contextualizing Canadian university presidents’ salaries doesn’t address the reality of huge gaps at many institutions between administrators’ pay and faculty members’ pay. But sunshine lists are important sources of information that might otherwise go unrevealed, and maintaining that larger purpose should be their primary goal – even when other changes might be worthwhile.